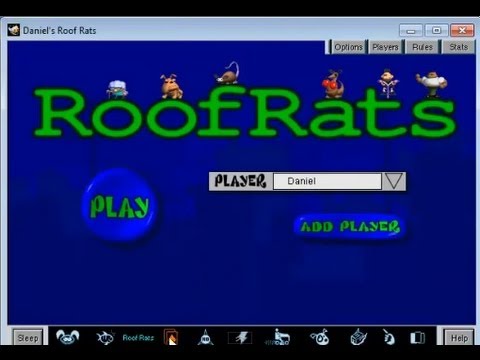 FACEBOOK :
The third game in the “After Dark” pack is Roof Rats : it’s a puzzle game in which you have to safely get down all the tenants stuck on top of a building, by detonating rooms of matching colours. When at least two rooms are eliminated by clicking on them, the tenant on top of that column will fall down closer to the ground. When a tenant reaches a safe distance they will jump off the remaining rooms and run off the screen. Each creature has its own distance at which it can safely jump off : the marine will escape when there are 5 or less rooms below him, the kangaroo will jump off at 4 or less rooms, the kid on the pogo stick will bounce off at 3 or less blocks, the bulldog will escape at 2 or less rooms, the mouse will run away at 1 block, and the old lady must be lowered all the way to the ground, meaning the column she’s on will have to be completely destroyed, which is not so easy as it sounds. Clicking on a pair of at least 2 rooms will make them flash, indicating they are ready for detonation and clicking once again on the same pair will cause it to disappear. If you change your mind, you can click somewhere else to cancel the command. Once the last block of a column is removed, the other columns will slam together, filling the gap. If you’re lucky, or if you planned your moves carefully, the columns which have just joined will create new pairs of rooms that you can take care of. The game ends when you’ve rescued all the guys from the top, or when there are no more available pairs to detonate. There’s a difficulty setting which determines the type of tenants stuck on top : “easy” has only the bulldog as the creature with the lowest escape height, “medium” has the mouse as the lowest escaping tenant, and “hard” introduces the grandmas who require lowering all the way down and also removes the marines, drastically increasing the difficulty, since more detonation has to be planned ahead, otherwise a lot of unpaired rooms will be left behind, eventually ending the game. It’s meant to be a strategy game, but most people I know, including myself, just start blowing up rooms all over the place and hope for the best – this doesn’t work out at all on the “hard” setting where a lot of planning has to be done to get the grandmas down. Roof Rats is addicting, fast paced and has a really catchy tune to it and won’t make your head spin after 5 minutes like Hula Girl. Give it a shot !