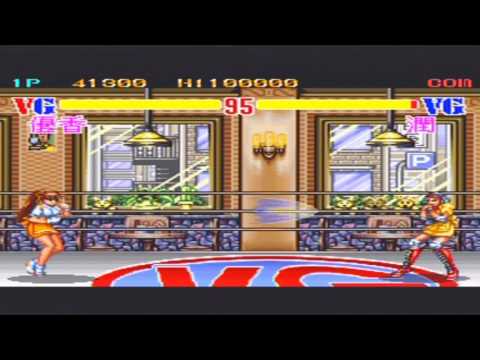 One of several titles in Giga and TGL’s long-running “Variable Geo” mature game franchise, a series of primarily all-female fighters and visual novels, “Super Variable Geo” (or Super V.G.) is the fourth title in the series, predated by “V.G. II: Bout of Cabalistic Goddess”, “Advanced V.G.” and “V.G.: Variable Geo”. Released in 1995, it is generally a stripped-down version of the Turbo CD’s Advanced V.G., removing the Hybrid boss characters and “Fake Yuka” as well as the “Graphic Mode” option, instead appearing as a more family friendly game suitable for most ages and illustrating its story scenes and character interactions with simple text as opposed to spoken audio.

The story centers around various family-owned restaurants throughtout Japan and a series of martial arts competitions used to promote said restaurants and determine the most powerful females. In order to enter the tournaments, participants work as waitresses which show the moxy of those they represent as well as gain a surge in popularity and increase patronage. The winner of the tournament is awarded with a large ten billion yen prize, a house anywhere on the planet that they choose, and the prestigious title of “Virgin Goddess”, but the losers are publicly or privately humiliated in a variety of graphic ways to teach those the “true shame in defeat”, which (in other words) is a convenient tie-in for its mature content.

At its core, Variable Geo is your standard versus fighter, unoriginal in nearly every way (barring its plot and the allure of an all-female cast, which Variable Geo is one of the originators of such in the fighting genre) and pays tribute to Street Fighter II and other fighters of the early 90s. However, it has gained a dedicated following due to it being one of the few adult-themed fighters that got progressively better with time (to a point) and as a whole takes itself at least somewhat seriously with a certain degree of craftsmanship and professionalism behind its characters and settings. This isn’t to say that it is an amazing fighting series as a result, but that a conscious effort was made to ensure that the series doesn’t simply pander to mature audiences and incorporates a solid fighting engine as well that can be appreciated by casual fighting enthusiasts.

The SNES/SFC version of V.G. is a good effort; it controls well, utilizes the system’s color palette to good effect with a few stages having a neat sort of pseudo 3D effect, utilizes more realistically modeled characters, and some of them have surprisingly fluid animation (Erina in particular is one of the most impressively animated sprites I’ve seen in an SFC fighter and looks more like an early KoF character when idle). All the primary characters are in place and the music closely matches other games, but is remixed for the hardware and is cool in its own way. For example, I like Ayako’s SoTO Techno/Rave Dance Club as its music actually takes advantage of the Stereo sound capabilities of the system and is quite catchy. Gameplay-wise, it handles relatively well (it’s a bit loose on the controls) and the A.I is moderately challenging. At max difficulty, some opponents like Chiho are almost impossible to defeat and incredibly psychic, lol.

With nine fighters, the roster is only average (as games around the time started increasing their rosters), but the nice illustrations and little story segments are still nice. As a whole, Super Variable Geo is a neat fighting game on the system. While there are better choices on the system visually, aurally, and from a technical standpoint, Variable Geo is consistently decent (not lacking in any given area) and is a good time waster that beats out some of the system’s more obscure fighters. This is a video of the game in action. Enjoy.