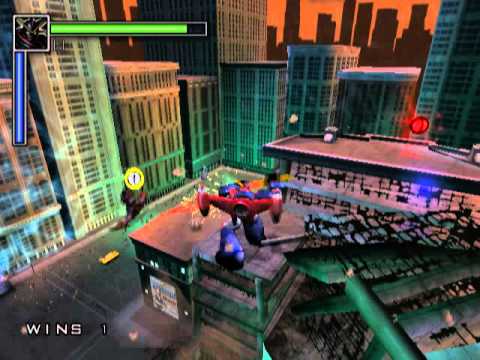 The game is set in the aftermath of an alien invasion of Earth where their hazardous fuels have spawned giant monsters that battle one another in city environments. The game pays homage to Kaiju and 1950s Science fiction films.
In War of the Monsters, players take the roles of large monsters in city environments. The game plays as a fighting game yet works differently than the traditional one-on-one structured rounds. Instead, fights can include up to 4 players in a four-way simultaneous fighting structure. The camera is in third person perspective, allowing the player to focus solely on their character.
Monsters have two status bars in each game, health and stamina. Like the standard fighting game formula, every time a monster takes damage, their overall Health bar drops until it is completely depleted, resulting in player defeat. Stamina determines how much energy a monster can attack with. The bar drops if a monster picks up another foe or performs a ranged attack. If the bar is full, a monster can perform special attacks, whereas if the bar is completely drained, they become temporarily immobilized.
Also unlike most fighting games, players are allowed to roam freely within the city area, which allows climbing of jumping from buildings and cliffs. Monsters can use the environment to deal out damage to their foes by making weapons of various objects found within the city, such as vehicles and rubble as projectiles, steel girders and stone columns as clubs and radio antennae as a spear to impale others, temporarily stunning them. There are also some environment pick-ups, which can increase health or stamina, appearing as green or blue orbs and floating radioactive signs. Buildings can be destroyed if a monster directly attacks or is thrown into it. In some cities, taller buildings can topple over sideways that can crush other monsters, killing them instantly. In the Adventure mode, along with a series of set fights with other monsters, boss battles are also present. They are much larger than the standard playable monsters and required certain strategies to defeat. “Tokens” can also be earned through Adventure mode, which can be spent at the “Unlocks” shop to unlock more cities, monsters, and monster skins. And you also can unlock mini-games like dodge ball or city destruction.
Multiplayer options allow 2 players via split-screen, which can be set to merge into one screen when both players a close enough to fit on the same screen.

50 thoughts on “War of the Monsters (PS2 Gameplay)”